At Rise Up, we are driven by one purpose, Own Today:

We believe that happiness at work starts by making sure that every team member feels empowered to do their best work every day.

Today, learning is one of the most fundamental business challenges and top of mind for both CEOs and employees. Yet, the learning industry is focused on the future,

trying to acquire tomorrow’s skills based on the long-term impact of technology and innovation. However, 70% of employees have not mastered the skills they need for their jobs today*.

At Rise Up, we believe that being future ready requires a shift today.

Therefore, we help organizations and their teams stay up-to-skill to be ready for each day.

We believe organizations must accelerate Time to SkillTM, enabling learning to transform business,

anchoring learning in the daily routines of employees and delivering training at business speed. Our LearningOpsTM framework combines business-driven methodology, innovative technology, customer-driven service and ongoing evaluation to provide a personalized learning experience for everyone, every day.

We know that every moment counts, and we want to help people improve their present and future by acting now.  We empower everyone to own today. 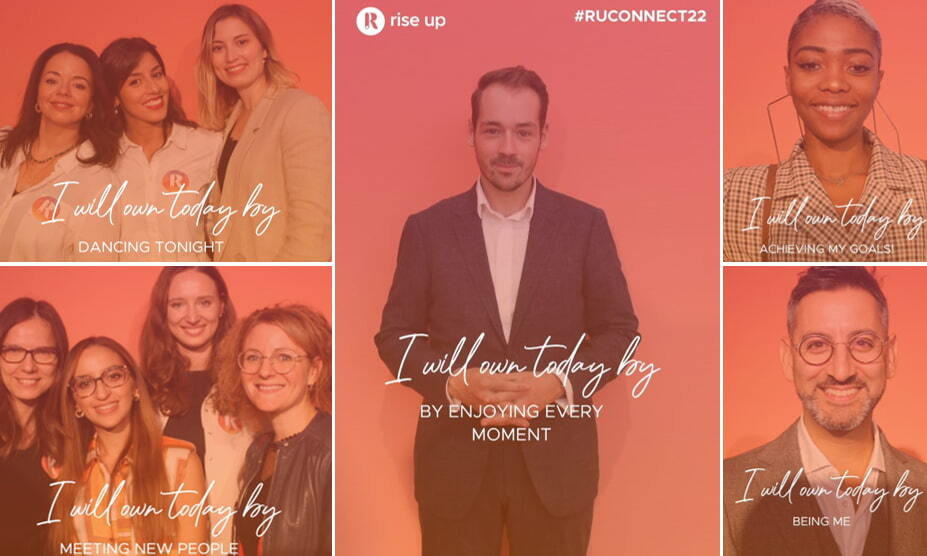 Rise Up was founded by two brothers who saw a great opportunity and moved quickly to own it.

The Birth of Blended Learning

In 2014, Arnaud and Guillaume Blachon were working at an audiovisual company and realized that no one was able to connect videoconferencing with learning. Finding an office in the ESSEC incubator, they launched an innovative solution on the market; Rise Up was born to broaden the horizon of corporate learning.

After a first direction developing a digital campus, the company launched its SaaS learning software solution in 2016 with a clear focus on blended learning, connecting face-to-face, e-learning and hybrid training. The same year, Rise Up participated in its first trade show eLearning Expo (which later became Learning Technologies) and began to gain momentum.

The company secured initial seed funding in 2018 from several investors, including IMPACT Partners, Bpifrance and BNP Paribas, and expanded into Portugal, Luxembourg and Belgium.

In 2020, Rise Up secured its first round of investment funding with MAIF Avenir, IMPACT Partners and Bpifrance and moved into the Netherlands as well. In January, Rise Up held its first internal seminar, a ski trip with 30 employees to Levassaix Les Menuires. Later in May, Rise Up counted more than one million users on its platform. To accommodate the fast growth of both revenues and employees – from 15 to 50 that year alone – Rise Up moved offices every three months, until finding its current home on the Boulevard Montmartre.

In 2021, Rise Up signed a strategic partnership and equity investment with Ifpass. The team continued to expand across Europe, forging into the UK and German markets. Thanks to its tremendous growth the company earned recognition from Capterra, HR Tech Outlook, LPI and Fosway Group. In 2022, Rise Up has over 100 employees between Paris, London, Belgium, Munich and Lisbon, and has doubled its team each year.

In May 2022, Rise Up raised €30M with Connected Capital, a leading B2B SaaS focused investment fund, MAIF Avenir and Impact Partners, allowing the company to expand its commercial organization and product suite as well as localize its solutions for European markets.

The product roadmap is focused on both personalizing learning and integrating Learning in the Flow Of Work (LIFOW), with innovative features including a motivational chatbot and a Microsoft Teams integration.

Today, Rise Up remains a one-stop-shop learning technology stack – LMS, LXP and Authoring Tool, omnichannel and multimodal service – that delivers technological innovation by harnessing AI and ML; is easy-to-use for learners, trainers and administrators; and delivers both learning and business success for customers.

Passionate about technology, Arnaud is an engineer; he holds a master's degree in Information Technology from Supinfo. He began his career as an application developer at G2J.com and then became head of R&D after the development and launch of the MyEasyVision software, marketed in France, America and Asia. After the G2J acquisition by Videlio, he was named head of the group's innovation laboratory. In 2014, he co-founded Rise Up with his brother and completed the entrepreneur's program at The Founder Institute. Today, he leads Rise Up’s commercial approach and international expansion, pushing teams to not only meet the challenges of tomorrow today, but anticipate the next innovations as well. After obtaining an engineering degree in computer science at EPITA, and a university degree in Mandarin Chinese at Université Paris Cité, Guillaume began his career as an information system consultant. He was a program manager for Videlio and then head of R&D at G2J.com (after Arnaud!). While launching Rise Up, he completed the entrepreneur’s program at The Founder Institute. Throughout his career, Guillaume has developed his expertise and skills to combine human needs and technological solutions. Today, his ambition is to strengthen the company’s DNA on technology and innovation by building strong synergies among internal, customer and partner teams.

Today, Rise Up is the fast-growing European learning software solution, with a community of 1 million active learners in 73 countries and more than 100 enthusiastic and creative employees.

Looking to join the Rise Up adventure? Or simply want to know more about our team and follow our news? Rendez-vous on our Welcome to the Jungle and LinkedIn.
*Gartner study.